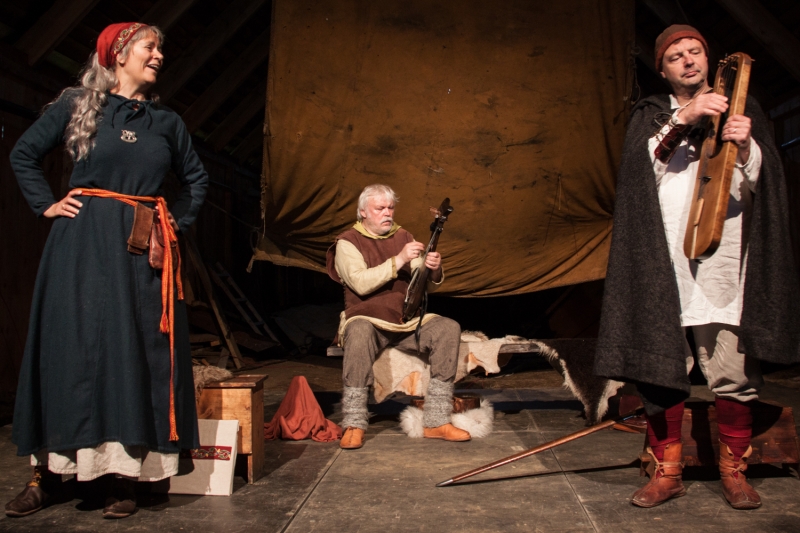 History and art: Storytelling by music

History is our fundament, and we perform our music in a historical context.  On stage, we give our audience a combination of storytelling and music, based on Scandinavian history.

In 2016 our performance is called «Unn the Deepminded – the long journey». Unns story is told in English. The songs are performed in Norwegian.

About  «Unn the Deepminded  – the long journey»

Unn grew up in the 850s, in Norway – but from there she travelled to Scotland, Ireland, the Hebrides, the Orkneys, the Faroe Islands, and finally, to Iceland. Her life was indeed a long and fascinating journey.

We will tell you about the main events of Unn’s life, as it is told in Laksdøla saga. We will do this through songs and selected sayings from the old Norse literature, mainly sagas and  «Håvamål» – a famous viking poem.  The songs are from the album «Det som bølger uti havet» // «What waves might bring», with lyrics and melodies by Rolf Agaton. He will play the lyre during the performance, as well as John Vedde.
Tone Holte has written the text and plays the role of Unn in the performance.

10.9.16  Tønsberg vikingfestival . In Tønsberg we performed onboard the viking ship «Saga Oseberg»! That was indeed suitable for the concert «Unn the deepminded – the long journey».