What kind of music?

This is an album with a soft and naked sound; just voices and a lyre.
It contains new materiel as well as interpretations of old songs from places within the «Viking area».
The music is connected to musicological ideas of how one might have treated music in terms of working with rhythm, melodies, harmonies built by few tones;
it is also an attempt to illustrate another vision of perception, the music and the lyrics working together. Read more about the songs.
Its an example of non-metal viking music. 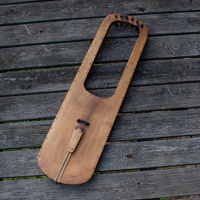 Rolf is playing  a replica of an archeological find from the «Sutton Hoo» boat grave, 630 BCE, at the south east coast of England, now in The British Museum in London. Remnants are found at many places for at least 400 years onwards. British music archeologists think that the lyre originally might derive from the around lake Mälaren in Sweden.

Johns lyre is a replica of a «Kraviklyre». In 1904 the remains of a lyre was found on the norwegian farm Kravik in Nore in Numedal. Its supposed to be from around 1300, but this is uncertain. There exist a picture of the original finding. Our lyre is made by the skilled instrumentmaker Sverre Heimdal.

Listen to the album «Det som bølger uti havet» // «What waves might bring».